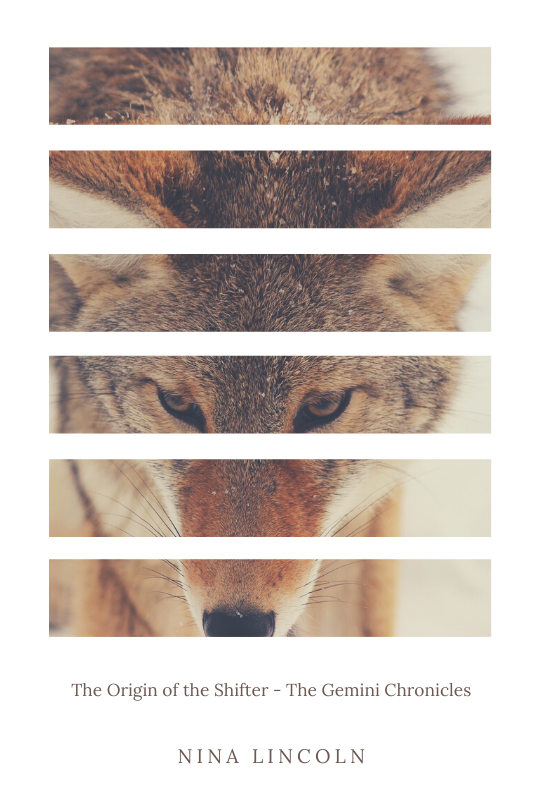 This is how I envision the shifters of Lina’s world becoming what they are. I hope you enjoy my short story ~ Nina

“Sit down and listen, child,” she said to me, brushing her weathered hand against my head, soft but firm.

“Now then, where was I?” She said absentmindedly, her eyes milky white where the obsidian color of her sharp-eyed gaze used to be.

“The story of the wolves, Nanna,” I reminded her, eagerly.

“Ah, yes, the story of the wolves,” She continued, her sightless eyes gazing into the forest beyond the small clearing in which our house stood.

“It is said, Young One, that our ancestors were an unruly people. They forsook the rules of their brethren and ran amongst their kind in strange ways.  They worshipped the Goddess that provided for them a home, food, and shelter.  They danced in the firelight without clothes and make sacrifices in honor of the bounty she provided. They lived without rules, nor expectations. They loved deeply and they lived peacefully. In return, the Goddess provided them with rich meats, bountiful grains, and hardy vegetables. They were known by many, who ignored their beliefs in favor of the goods they were willing to provide. For others, it became an abomination that they would do anything to put down.”

“Why, Nanna, why did they run around unclothed?” I asked, curiosity getting the better of me. I jumped when she thumped me on the head, her gaze never leaving the tree line beyond. I flushed under her punishment and rubbed my head, shame and annoyance overflowing. I knew better than to be too eager, but I couldn’t help but want to know.  I wanted to know why about everything.

Why did papa leave in the middle of the night and sometimes not return for days?  Why did mama lose sleep while she waited vigilantly for him to return? Why did Nanna always stare into the trees, with her now blind eyes? What was she waiting for?

Even so, with all of the whys that pressed at my throat aching to break free, I knew the expectation. The ways of the Wise One were ingrained in all of us.  We were always to be patient.  Answers would come to us when they were meant to.

“They were arrogant, passionate,” She looks at me sideways and I shiver under the blank stare, “sinful.”

This time I waited at her silence and rewarded myself with a glow of pride when I managed to keep the questions burning on my tongue from leaving my mouth in a rush. She hardly noticed and began to rock in the wooden chair with mysterious runners. A group of travelers had come through asking to pass through our land and as a gift for the privilege, left the strange chair behind.

“One day, a man, who fancied himself of God, came upon this clan of people. He walked onto their land and laid eyes upon the bare breasts of the women, the hanging appendages of the men.  He could not contain his shock and ire, who were these people to walk among each other without shame or a care for modesty? Who were these heathens who worshipped at the altar of a woman and mocked the ways of his God?”

I flushed at her mention of women’s breasts and ducked my head to hide my embarrassment.  Nanna could sense things that didn’t seem possible, even after losing her eyesight years ago. A few years ago, I thought myself sneaky and tried to grab a freshly baked slice of bread before our noon meal, she slapped my hand with the soft warm slice and fell to the ground to my surprise.

“He screamed at them of their perfidy.  He railed at them their sin.  He cried for them to find their way to the teachings of his God.”

I tried to envision a people who walked naked without embarrassment but could not envision it. Here, mama insisted I wear my nightdress even within the confines of our home.

“They paid him no mind, for they were not concerned by the teachings of a misplaced god.  By the scripture of a people that tore apart the hundreds of years of lore that had existed before them. They refused to comply.  And that enraged him more.”

The sharp scream of my sister rang out and we both swung our heads toward the clearing where my baby brother ran after her with a stick, his face stretching into a grin.  I shook my head at their antics, feeling infinitely older and wiser at my ten years of age.

Nanna turned back to me, and I avoided her eyes, her all-seeing all-knowing eyes as she continued, “The man, who of god claimed to be their savior,” she spit the words, bubbles collecting at the corners of her wide mouth, “he cursed them to run the earth as animals.”

“How?” I whispered, chills running down my back at her vehemence.

“You make it sound so bad,” I replied, confused and hurt by her summation.

“Son, it is always bad to be at the mercy of your animal. Our people have had hundreds of years to learn the ways of the wolf, to harness our inner savage, to make the best of a situation that was born of hate and intolerance.”

“What happened after that?”

“We lived as we were meant to, without forsaking ourselves or our people. It wasn’t an easy time and many fell to their beast.”

I sat at her feet and pondered her words. Yes, we were at the mercy of our inner animal and could suffer great consequences if we ignored it. But we were a peaceful people.  We did not hurt the humans who coexisted around us.  We did not seak out the demons that haunted the world we lived in. We offered our plates to strangers and our hands to friends.

Perhaps we were more beast than man and perhaps our people had been sinners, but no matter, we were the pack that we were now.  We were the clan that protected its own now.  We were the beating heart of a race that had been born out of hate and thrived out of love.

I smiled, a strange feeling of heat pulsing in my chest.  I stood to my feet and turned to Nanna who gazed at me patiently, her wrinkled face devoid of emotion.

“Thank you, Nanna,” I said and kissed her cheek, the roadmap of her life moving beneath my lips.

“Go on with you,” she said, her voice stern but her hand gentle as she patted my shoulder and pushed me on my way.

I stepped down into the dirt, kicking up puffs as I did. My siblings still played loudly in the clearing where our home stood, their shouts loud and carefree. The noonday heat beat down on my head, warming me immediately.  Compelled to turn back, I watched as she mouthed something I could not make out and raised her face to the sky, a gentle rain washing over her face.